SPICE (Simulation Program with Integrated Circuit Emphasis) was developed at the Electronics Research Laboratory of the University of California, Berkeley in 1973 by Laurence Nagel with direction from his research advisor, Prof. Donald Pederson. Then Spice emerged as an industrial standard through its descendant and is still the reference 40 years later.

The last version released at Berkeley on 1996 is spice3f5.

The technical report No. UCB/ERL M520 written by Nagel gives an interesting description of the algorithms involved in Spice. I recommend to read the part 2 and 3 that explain the equation formulation. The next parts describes the numerical analysis.

The relevant references on Spice are by date of publication:

A basic example to introduce circuit modelisation in Spice 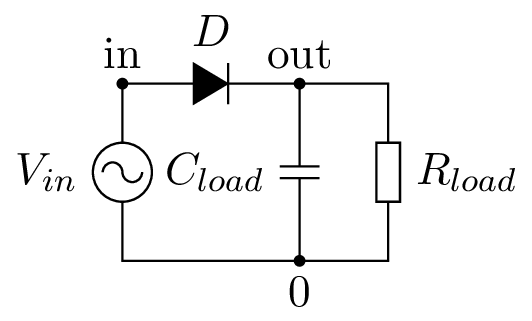 Circuits are modelled by a simple language, for example a simple rectifier could be modelled as follow:

This model is made of a sinusoidal source, a rectifier diode, a filter capacitor and a resistor load.

The lines starting by a dot are special directives that indicate here the title of the circuit, a file inclusion and two parameter definitions. The other lines define the element in the circuit, the so called net list.

Each element in the circuit is specified by an element line that contains:

An element name starts with a letter that define the type of device, for example C for capacitor and R for resistor. This letter is suffixed by an user name to identify uniquely the element.

The model of the 1N4148 diode is provided in a separate file. Usually manufacturers provide Spice models for their devices on their web sites. This file can be downloaded here and it contains the definition of a sub-circuit made of a diode and a large resistance in parallel to improve modeling in the reverse mode of operation:

A line starting with a + indicates the previous line continue here. The .model directive defines a device model called 1N4148 for the diode which is based on the diode Spice model (identified by D) and parametrised by the following lines.

The chapter 2 of the ngspice manual gives a complete overview of the circuit description and the following chapters describes the available device models.

Spice and its derivatives

Since the source code of Spice was open, many derivatives forked from the original source code of Berkeley, some are commercial like PSpice of Cadence and LTspice of Linear Technology, or open source like ngspice and gnucap.

Ngspice (New Generation Spice) is the open source successor of spice3f5 featuring a mixed-level and mixed-signal circuit simulator. It is based on an updated version of spice3f5 and enhanced with XSpice (mixed signal), Cider1b1 and GENIUS TCAD (mixed level). Ngspice is still maintained by a group of maintainers and the version 25 was released on January 3rd, 2013.

Gnucap (GNU Circuit Analysis Package) was an attempt to rewrite Spice from scratch by Albert Davis in 1993, but the last version was delivered in 2006 and now the project is no longer active (excepted some commits in the Git repository in 2013). The thesis of Albert Davis entitled "Implicit Mixed-Mode Simulation of VLSI Circuits" contains information on circuit computation and simulation.

A rewrite of spice3f5 from scratch is justified since it was developed as a research project rather than an industrial software. The code is mostly undocumented and relatively impenetrable, thus it will probably not evolved any more. 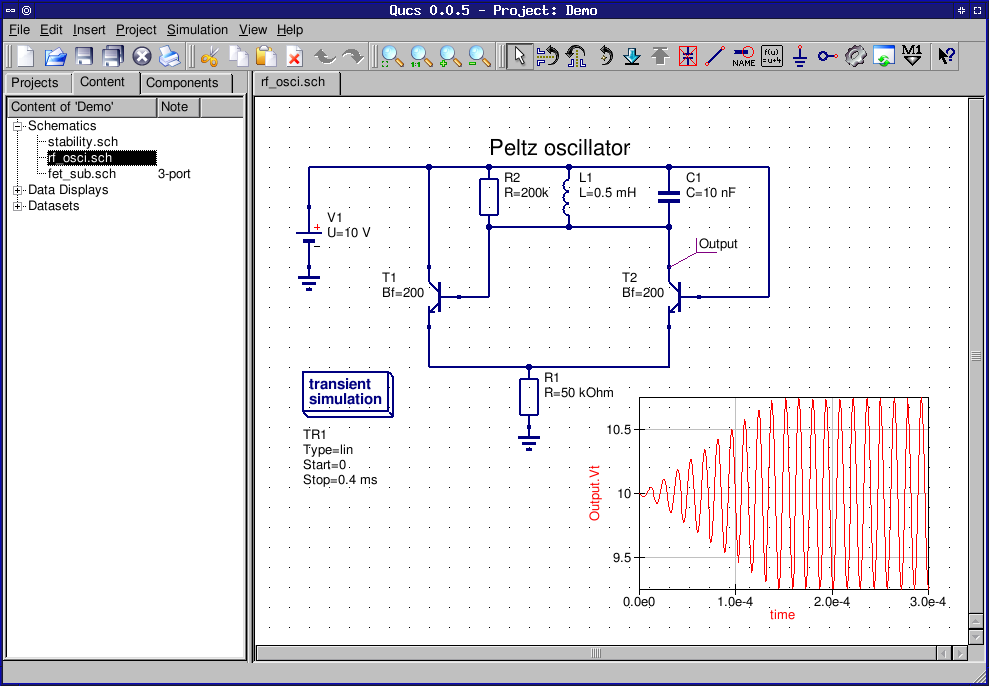 For simulation of Spice netlists within Qucs see this tutorial.

The technical document contains information on circuit computation and simulation within Qucs (see also this link for more references).

Qucs GUI was originally developed using the Qt3 framework and a port to Qt4 was started some years ago. Unfortunatelly the project was sleeping these last years and the original founder is not longer active on this project. I think it is a mistake to aim to develop a complete toolchain in a non commercial context, since it is too much work for a small team working on the project during its free time. Just the GUI maintenance (Qt4 port) require a lot of work.

We will now focus on Ngspice since it is the most mature and active descendant of spice3f5.

Usually Ngspice is available as a package in the major Linux distributions. But I recommend to check the compilation options before to use it extensively. For example the Fedora package enables too many experimental codes that have side effects. The recommended way to compile Ngspice is given in the manual and the INSTALLATION file. Ngspice is an example of complex software where we should not enable everything without care.

For the following, the compilation option --enable-ndev is known to broke the server mode.

For historical reason Ngspice features a complete tool chain which is made of:

Nowadays we can replace the analysis tool by the Python environment and only use the heart of Ngspice for circuit simulation. Thus it would be nice to package the simulator in a C library and steer the circuit and simulation through an API accessible from Python.

The TCL module Tclspice of Ngspice uses partially this approach to embed Spice in TCL. But it is more a hack than a clean approach. Indeed this module uses the interpreter functions to communicate with Ngspice. For example a circuit definition is read using the command source which read the circuit from a C file handle and not from a string buffer. However probe values are accessed through internal C data structures.

We could try a similar approach for Python, but the source code of Ngspice is mostly undocumented and quite impenetrable. Thus by pragmatism we will first use a pipe to connect Ngspice and Python all together.

For the following, the compilation option --enable-ndev is known to broke the server mode.

If this option is enabled then the binary output is spoiled with many strings of the form "%12.50\b\b\b\n" ("\b" can be displayed "^H") that correspond to the percentage of completion of the analysis. A way to check for this bug is to check the output size is a multiple of a double (8 bytes).

We will now test our Ngspice-Python bridge approach using our simple rectifier example.

First we will write a flattened version of the code to the file simple-rectifier.cir:

We have added at the end of the file the .tran directive to indicate we want a transient analysis from t = 0 to 100 ms with a step of 100 us. We also setup some options to indicate we want to simulate the circuit at a temperature of 25° and a binary output.

Now we run this command using pipe and redirection in the shell:

The output.raw file (standard output) must contain a text header and then binary data:

The number_of_line.txt file (standard error) must contain this line:

The binary data after the line Binary: is the serialisation of an array of dimension (number of lines, number of columns) = (1016, 3) of type double (8 bytes). Depending of the analysis, the values can be real or complex. Complex values are serialised to two doubles and thus count twice.

We can now plot the waveforms using the IPython interactive environment. To do this, we have first to launch the environment using the command ipython --pylab and then copy-past this code in the terminal: 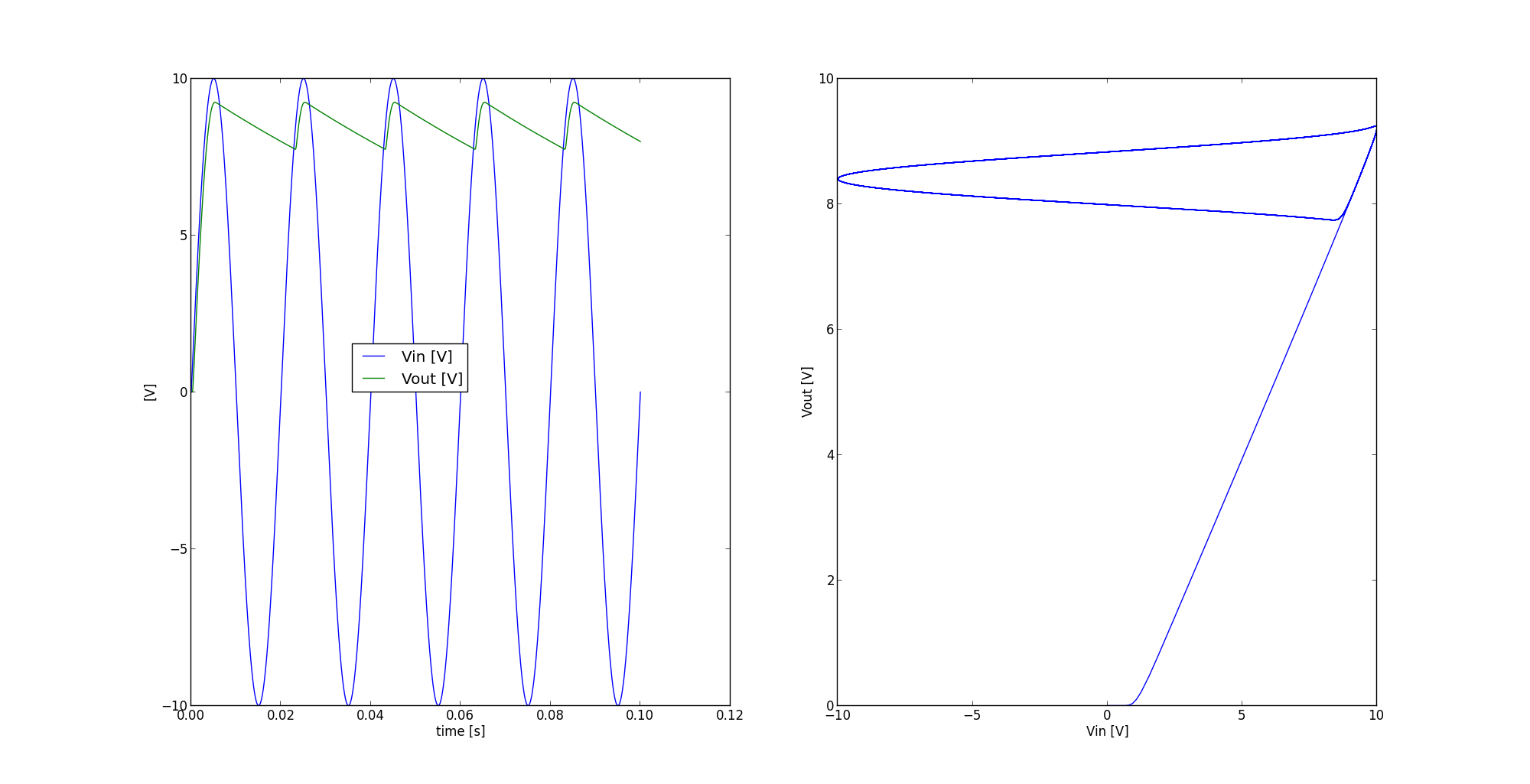 The size of the binary output is tested so as to ensure the output is right.

We have now all the keys to write a more elaborated Python module to interconnect Ngspice with the Python environment.

Your browser is out-of-date!